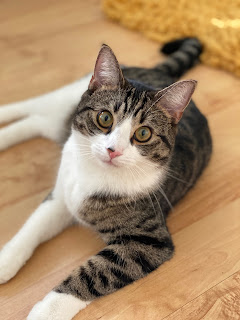 Bun came to us completely by accident.

After loosing Vixen in February 2019 I really wasn’t looking to add to our family. Vixen lived with my Mum and was her cat mostly. However we are all a family and Vixen was always classed as mine too.

With me living in Kent with the Pickles and Phoenix flitting between two houses my Mum was at home alone, except for when Phoenix stayed with her. I knew someday she would allow another cat to move in. She wasn’t ready though, Vixen was her baby, I think she loved Vixen more then me!

So in May 2019 I received a text from our vet with a photo of a little kitten. The kitten had a very strange resemblance to Sox and I thought he was just showing me this kitten because of the resemblance. When I replied he told me it was a stray that was handed into the clinic and they were looking for a special home for it.

“I know where this is going” I thought to myself.

The next week I had a text to go and meet the kitten at the clinic. They had kept her for 7 days and had advertised one as being found but nobody enquired about a lost kitten. My poor Mum wasn’t sure at first, but once she met her I don’t think she could resist. 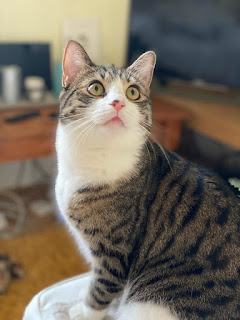 Baby Bun has now been a part of the family for almost two years. She has settled into the family really well. We call her Bun as she has huge back feet that stick out to the side like a floppy bunny.

Phoenix needed a kitty companion as she was so close to Vixen and really took to looking after this little one.

Bun is just adorable, a mix of Maine coon and Bengal. She’s absolutely mad, hyper and very playful. She has brought a little ray of tabby sunshine into our lives and helping to heal our broken hearts. As for my Mum, well Bun has well and truly become her little baby and sidekick now. I knew it wouldn’t take long.