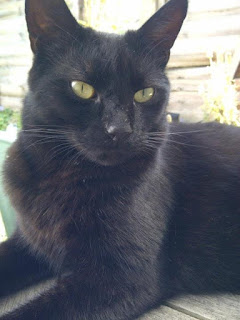 Vixen paws, our little demonically challenged Bombay girl. Vixen came to us in 2008 in a similar way Sox did. She began hanging out in the garden with a smaller kitten we called Smokey. For many months they would both be loitering around waiting for food. We initially thought they were both strays and assumed Smokey was Vixens kitten.

We later found out they had a home in a block of flats just behind the garden but very rarely returned there. The owner was happy for them to be fed elsewhere as long as they were happy so we continued to feed them.

Some months later Smokey disappeared, we hadn’t seen him for many weeks but Vixen remained. We soon discovered Smokey had been adopted by a family in the next street.

As winter crept in we became worried about Vixen. With snow falling it was heartbreaking to see her outside. We had invited her in many many times but she never accepted our invitation. Until one evening when it was particularly cold and snowy she ventured inside. We made her up a small bed out of sheets in the kitchen and she snuggled down for a little catnap. An hour later she was ready to go back outside. It was so heartbreaking to watch her have a small warm up then going back out, but what else could we do? She was crying to go out it seemed cruel to keep her inside.

This went on for some weeks. We believe she had never been fully welcomed into a home, we had tried to entice her into the living room to no avail. To make matters worse we believed she was also pregnant once again.

Soon after she disappeared for some time.

When she returned she looked noticeably slimmer, we assumed she had had the kittens and only just reappeared. 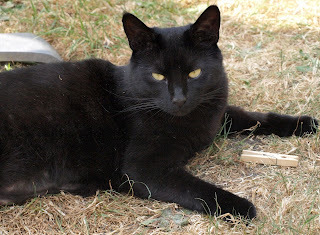 In August 2010 Vixen moved in permanently, after many months of returning to her old habit of sleeping in the kitchen, she finally got the courage to join us in the living room.

A few weeks later we noticed she was looking podgy again, assuming she was once again pregnant and being able to feel small lumps in her abdomen we took her to the vets. They felt her stomach and told us she was in fact pregnant but was going to do an ultrasound to confirm it.

The ultrasound shocked us, she wasn’t pregnant at all, the hard kitten like lumps were big chunks of impacted faeces. The pain she must have been in must have been horrific. She was admitted to the hospital and given enemas under anaesthetic. She was then diagnosed with a condition called Mega-colon. A painful gastric condition where the colon is larger then it should be and results in recurrent bouts of constipation. The good news was that they could see no uterus on the ultrasound so were happy to say she must have been spayed.

Vixen lived with the painful condition with medication. She was given daily laxatives. Her condition improved greatly when in 2012 we found a new vet (the same vet who Sox adored) who was more knowledgeable on the condition and came up with ways to manage it better. On occasions Vixen would have Microlax mini-enemas to help her along. A funny thing happened when the vet examined her and informed us she had never been pregnant. The time we thought she was pregnant? It was more impacted faeces. How did he know this? Well it turned out Vixen was in fact a male cat.

How vets who had previously scanned her could have missed this is beyond baffling. Vixen had absolutely no male cat traits and was always more female in personality and so nurturing to kittens. When she had to stay in the vets she was always very interested in kittens that were about. 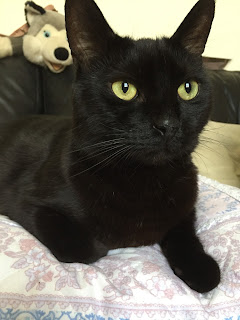 We called Vixen demonically challenged because well, she could be a demon at times. A real mischief maker.

In 2015 she was put on prozac as she became very angry. Angry at the world it seemed and would attack everyone around her. A few weeks on prozac and some understanding and she was back to her normal self. It was this that sparked my interest in the possibility that our pets can also have mental health conditions much the same as humans do. If they can have anxiety then why not other mental health illnesses?

In late 2018 Vixen became unwell, it was found her liver was enlarged and a biopsy was undertaken. When the results came back as Lymphoma it was devastating. We could not believe we was here again with the same diagnosis, same treatment options. Vixens was caught earlier then Sox’s was and she responded very well to treatment. Quickly going into remission. Her blood work was promising and she was showing really good signs of improvement.

Until one weekend she quickly deteriorated. Just the day before her blood work had been so positive. Vixen passed away at home the very next night. So suddenly. We will never know what happened. In my gut I feel it was the mega-colon and not the lymphoma.

To loose her so suddenly was absolutely awful, despite her being unwell with all the signs showing improvement we was hopeful she could beat it. It’s possible the lymphoma had spread to her brain, it’s also possible she had an intestinal rupture. Either way we will never know. Vixen left a very big hole in our hearts, she was such a beautiful and loving cat who everyone adored. She also loved going to the vets and being spoilt.

One thing that was very strange, she passed away on the same day of the week, of the same month at the exact same time that Sox passed. Coincidence? 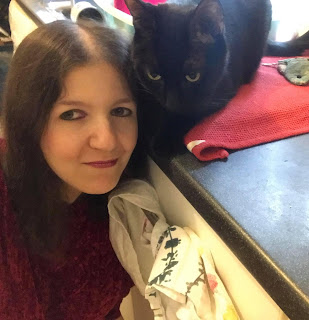 Vixen like Sox lives on in our hearts and the hearts of everyone she touched.