That really is the question. A question I found myself faced with on a recent Instagram message I received. The message from a new puppy Mum on whether I would recommend bed sharing?

Last night I thought of that question again as I found myself hanging out of the edge of the bed, just a corner of the duvet for myself. Daring not to attempt to rollover and hit the floor with a bump.

Bed sharing was always something I avoided. Back when the only fur baby I had was Sox it was a definite no. She had her own bed to sleep in and downstairs was a perfectly good sofa, another bed, a slightly battered cardboard box with a pillow in. She didn’t need to sleep with me.

She tried, she tried, and she tried again. Most nights as soon as I’d turn the lamp off I’d hear the sound of collar bells coming up the stairs, door opens, little footsteps then a thump on the bed. Closely followed by

Then putting her in her own bed that was beside mine. She would try this a few times and then give up. Yet every morning I’d wake up with her sprawled across the bottom of the bed. I decided I was fighting a loosing battle.

Once I allowed her to sleep on the bed she did it less and less, it became something she only did when she was frightened or unwell.

When Vixen came along all bed rules were forgotten as she loved to snuggle. Vixen preferred to sleep on the pillows though, something I still never let them get away with. The bed is one thing but the pillows are off limits.

When I adopted the Pickles it soon became apparent they also preferred the idea of bed sharing.

Phoenix was never a cuddly puppy, she hated being held, wouldn’t sit on the sofa for cuddles and to be on the bed was probably the furthest thing from her mind.

When Phoenix had her scare in autumn 2019 which resulted in her needing emergency surgery at 3am all of that changed. As soon as she came home she wanted cuddles and she has been a clingy cuddle monster since. After her surgery I spent two weeks sleeping on the sofa with her on the floor. As soon as her stitches came out when I went to bed that night she jumped on my bed with me. Now whenever Phoenix is with me she sleeps on the bed, usually right in the middle. As well as both cats.

As she splits her time it’s not overly often I have phoenix on the bed. Starla usually prefers to sleep in the living room. Unless she gets cold, or it’s windy. So most nights it’s just me and Cymmi.

In all honesty I wouldn’t have it any other way. None of them actually get in the bed, they just sleep on top. Some nights I find myself cuddled up with Cymmi, cuddling him like a teddybear and I think back to the start he had in life and what he’s been through. It warms my heart that he feels safe enough with me to feel able to enjoy cuddles. When Phoenix is taking up the entire bed, kicking me in the back? I think back to the night she had her surgery and I would have given anything to be cuddled up with her instead of waiting in a cold waiting room.

As for when all three of them are on the bed with me, well I have been told we resemble a pack of Lions. 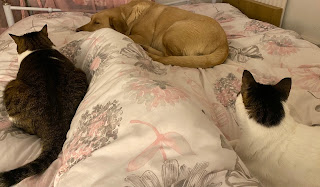 I love sharing with my furry family, and I wouldn’t have it any other way. So I have to change and wash my bedding a little more often then most. I like clean bedding, plus the bed gets a good brushing down before bed each night. So hygiene and fur really isn’t a problem. Even better when you invest in a good quality throw that they can lay on instead of your bed sheets.

So yes I would recommend it if it is something both you and your pet will enjoy. Although I will admit there is an exception to the rule, if I am expecting company in the bed then it is a no pets allowed.

Much A Poo About Nothing

Picture the scene, a chilly autumnal evening, leaves are falling from the trees, the sun is just about setting and inside the Pickle Palace Phoenix is sitting in front of me giving me the

Phoenix responds in that oh so cute puppy way with the lift of the ears and a head tilt. It’s just so cute I cannot resist it. If you have dogs you know the look oh too well.

We both get ready coats on, harness on, lead on and phone and keys in the pocket. All set.

The walk carried on much as it always does with nothing eventful occurring. Of an evening we just do a small walk as she has a run in the morning. We was having a lovely little stroll chatting away as we always do. When she stops and assumes the position.

I feel in my pocket and to my horror I DO NOT HAVE A POO BAG!!!!! In slight panic I check every pocket in my jeans and coat. It’s unusual for me not to have one SOMEWHERE. Much as I search there was no poo bag. Then it dawns on me that I washed all of my jeans that afternoon and the pair I’m wearing was one of them. I had emptied all of my jeans of poo bags earlier that day.

The amount of times I take Phoenix out loaded up with hundreds of the bloody things and she doesn’t do one, or the fifty that fall out of my pocket in the shops whilst searching for my wallet. Tonight not one, not one little poo bag and I’m now standing faced with the jumbo frankfurter of all poos and not one bag. All I have to hand is a tissue.

Through some miracle I managed to wrap the poo in a little package in the tissue, then proceed to walk home carrying this little white makeshift bag of poo, whilst dealing with a pulling dog.

What is usually a short walk seemed to take forever, walking home dealing with the constant sniffing, pulling and tidling all the while praying that the tissue doesn’t give way and poo spills out all over the place. Or even worse I could bump into the guy that I quite fancy from around here somewhere. No I’m just not even going to imagine bumping into him now as poo is spilling out of a tissue no.

I have never been so relieved to make it home as I was that evening, to finally chuck the poo ridden tissue into the bin and carry on with the evening. Phoenix of course found the whole situation comical.

This is what you are likely to find in this blog, posts and articles just like this one. Little stories from our daily lives, food and product recommendations, training tips and tricks. Truth be told I have no idea what the next post will be but one thing I can be sure of is I will tell it exactly how it is, poo and all. Ok so not every post will contain poo stories (I hope)