The Pickles, another nickname that has really stuck. The pickles are Starla-Le-Luna and Cymmi-Lio. 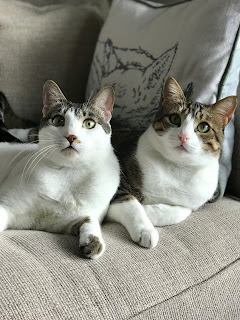 After loosing Sox in February 2016 I was keen to have another cat, preferably a tabby but I was ready to offer my love and home to any cat which needed the home I could provide for them. I knew I would have another female called Starla as this is the name me and Sox had agreed on for her kitten.

Just after loosing Sox I had a vivid dream where I visited her on Sirius and she told me she would return to me as Starla but that she wanted to bring another cat with her, a boy, called Cymmi and would I agree to be his mummy too. I agreed of course.

Throughout 2016 I was searching through profiles on rescue homes websites. I definitely wanted a rescue cat as I believe every cat deserves a loving home, if I was to matched to one then that would be my cat. Each time I found my potential kitty there was an issue they either could not live with other cats or dogs. I was happy to take on an older cat, a disabled cat or a cat with medical needs but so far the search was futile.

Until one evening in 2017 I was watching coronation street and during the break picked up my phone to browse facebook. The first post that came up was from a friend of mine who was involved in rehoming cats from Egypt. There was a photo of a young female tabby cat, me and Sox’s special symbol was a star and on this particular photo was a star. I knew it was a sign and that she was my cat.

Her name was Pearl and she was one year old, she had been found as a young kitten on the streets of Alexandria in Egypt, found beside a deceased kitten and with a large open ulcer on her hind leg meaning she was unable to walk. By now the wound had been treated and healed. She was described as a happy and affectionate cat who had never had any offers of a home. She had just arrived in Northumberland UK to another rescue where she was being fostered.

Needless to say by the time Coronation street had finished I had reserved her. 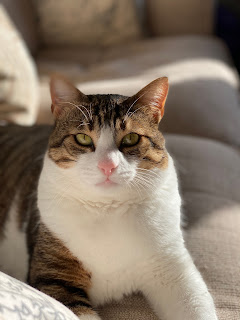 Later that evening I was told that the female cat was very close to a male of the same age who she was always with in the rescue centre in Egypt. They had travelled to the UK together and ideally needed to be rehomed together. I have never believed in seperating bonded cats so I reserved him that very moment.

The male cat was called Darth, he was also one year old and had been rehomed a few times in Egypt but was returned. He was described as a very very shy nervous cat. I wasn’t phased at all. 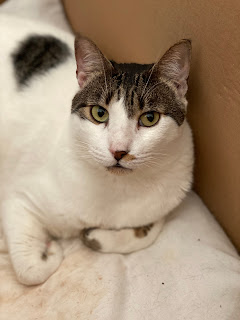 They came to live with my a few weeks later once all the checks had been completed. The morning they arrived I was greeted with two very frightened little faces and a strong smell of poo. They were covered in it. They had obviously both pooped in their carriers and had sat in it during their long journey.

As I opened the carriers Pearl came out all affectionate wanting a fuss. Instead she got a cleanup. The boy Darth, as soon as I opened his carrier he flew like a flash around the room and up to the top of the wardrobe. I didn’t want to stress him any further so thought I could clean him up later. I didn’t need to as the girl ran upto join him and cleaned him up.

I knew their names didn’t suit them, when I called out Starla Pearl responded. I knew it was her and the boy must have been Cymmi. Although I was also considering the names Lunar and Leo. It was only that night my partner at the time with his Italian background put the names together to form quite uniquely sounding names. Starla-Le-Luna and Cymmi-Lio ironically the only people who can pronounce their names correctly are either Italian or Spanish. Mostly they are called Starla and Cymmi (pronounced Star-La and Sim-ee)

They spent the next few days in their own bedroom settling in before gradually being introduced to Vixen and Phoenix. Cymmi was so nervous whenever I entered the room he’d fly onto the wardrobe. I accepted the fact that it could take him a long time to settle. As the days and weeks went on they both settled. Vixen and Starla never got on at all but Vixen got on well with Cymmi.

A year after adopting them we moved into a new home. I thought this would really unsettle them. On the contrary they settled even better into the new home. They even bonded much better with Phoenix. Now Starla and phoenix are so bonded it’s beautiful, very often all three of them are on my bed together. Phoenix splits her time between me and my Mum so when she isn’t around Starla is on edge and looking for her.

Now they are both total lapcats, I only have to sit on the sofa and one of them is on my lap. They both sleep on the bed with me through the night. It took Cymmi a long time to get to this stage. He’s only just letting me pick him up now. He does love snuggles though and will jump on my lap for snuggles whenever he’s in the mood. Always on his terms though. He still freaks out if I try to pick him up but he is learning that it doesn’t mean anything scary is about to happen. 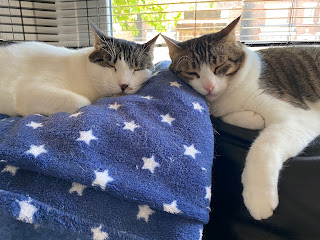 They are both such super chilled out and happy cats now, that is until the hoover comes out or the doorbell rings.